Day Five... glorious Day 5... we made it to San Francisco

We made it. Crossed the bridge today on route to our hotel at the Lodge at Cavallo Point about 2pm today. That's after we had a coffee at Rapha in the city. I've been meaning to check that place out, and it was worth the visit. But I digress...

We left Mountain View at 7am, and it was chilly. We headed up and over Old La Honda, which is a incredible climb. In fact if the light was better, I wanted to take more pictures. As it was, we only took a few. The road surface was fantastic, and the climb was beautiful in the early morning.

But we did manage to get some great descending on a sparsely populated but chilly road Tunitas Creek Road. It was spectacular.

It was chilly, dropping into the low 40's for the descent. Not San Diego anymore. I'm very glad I had my toe warmers and last years MDC vest.

Cody and I then popped out on highway 1 again. But this time we had a very nice tail wind and we rode that all the way to San Francisco. In fact, we felt a bit guilty... at one point cookin' along at 30+mph and chatting. But then we had some climbing as I wanted to swing by the Rapha store before heading to the hotel and ending our 5 day epic journey. We sat in the store and contemplated... contemplated that we might have created something that others might want to do. We then realized that it was time to keep the legs going and hurried across the bridge. 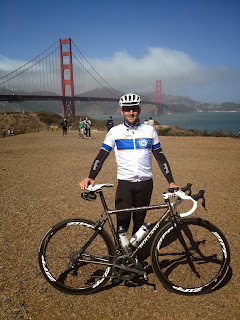 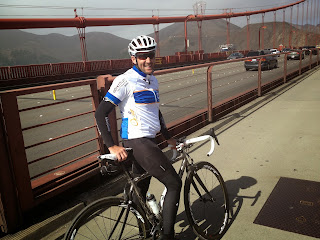 Who knew that Cody had a hidden fear. Something that only close friends know about. Something that close friends will use to our advantage at any point and provide free counseling. He was afraid of heights, and the thought of going over the bridge had him shaking. Naturally, I had to stop mid span to take a picture... he looks calm, but not so. All in the name of helping a friend with a phobia!

Time for some Carne and think about next year.... 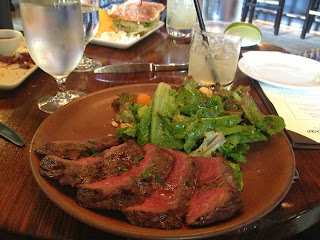 The Tour de Carne Asada courtesy of the hospitality folks at the Lodge at Cavallo Point. It was after lunch, but they took pity on me, and it was ecstasy. More tomorrow. I'll wrap up all the stats for those that care. Meanwhile. I'd like to thank Endurobites, Holland Cycles, Cycling Camp San Diego and of course Challenged Athlete Foundation for helping to make this possible. Without a doubt this an epic ride that needs to be done again, and our hope is that others will take the challenge and do this ride. It's a serious ride without doubt, but it's there... ready for the willing. Do it!